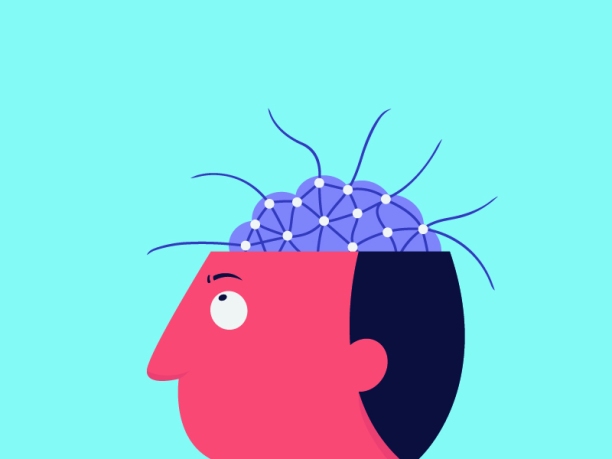 Man worried and confused with his brain complexity, abstract illustration in complexity thinking in man head.

In 2013, Dara, an active 42-year-old woman, started to experience strong pain in her leg. After trying physiotherapy with no success she saw a chiropractor who conducted a series of tests.  When all the results were in, the chiropractor sat her down and gently explained that he could no longer treat her as he was convinced she was showing early symptoms of a neurological disorder such as Multiple Sclerosis or Motor Neuron Disease.

With this “diagnosis” in her head, Dara rapidly began to decline. The pain in her leg intensified and, at times, when walking or standing, it would simply give way. Rheumatologists, neurologists and a litany of diagnostic tests failed to find anything. She was sure, however, that they had all overlooked something and that she did, in fact, have some serious neurological disease.

One of the rheumatologists suggested she see a psychiatrist who specialised in pain. Dara was deeply affronted by the very suggestion that the debilitating pain she was experiencing could be anything other than physical.

If you ask a person with chronic pain if their brain is responsible for their pain, they will most likely answer with an emphatic “no”. By saying that the pain is coming from the brain, there is an assumption that the person must be “making it up” or to coin a popular expression: “It’s all in their head.”

However, this is not the case. Just because the brain is responsible for pain does not make it less real. The pain is felt as actual physical pain even though the brain is behind its manifestation. That is, there are real physical and chemical changes occurring in the central nervous system and brain which make the person experience pain.

Pain always comes from the brain

“Pain is a construct of the brain,” says Professor Lorimer Moseley, Professor of Clinical Neurosciences at University of South Australia.

Professor Moseley explains that pain does not come from the injured body part at all but is always the brain which decides the level of pain experienced.

Professor Moseley explains that these things include, not only danger data from the danger detection system, but also such things as previous experiences, expectations, sensory information, even cultural norms and beliefs.

“While initially there was an injury to my leg and, as I later found out, some accompanying nerve damage, the misdiagnosis gave my brain a more sinister meaning to my pain and my body reacted accordingly,” she says.

Neuroplasticity is the brain’s ability to change its structure and functioning in response to activity and mental experience.

While the plasticity of the brain is fundamental to all human learning, it also means that chronic pain can become embedded in the neural networks of the brain and as, Dr Michael Moskowitz, author of The Neuroplastic transformation workbook explains, the chronic pain becomes learnt pain.

When the neurons in the brain associated with pain become damaged, they fire constant false alarms. This leads people to believe that there is something wrong with the body when in fact the problem is in the brain. Even though the body has healed, the pain system continues to fire and thus the acute pain changes to chronic pain.

In his book, Dr Moskowitz uses the principles of neuroplasticity to teach people how to unlearn chronic pain.

Just as brain circuits can be strengthened, the connections can also be weakened because “neurons that fire apart, wire apart”.

According to Dr Philip Siddall, Professor in Pain Medicine at Sydney University, the fact that the brain is plastic should provide people who suffer chronic pain with hope. Despite the changes that have occurred to the nervous system, they are not irreversible, he explains.

As you may have suspected, the woman I mentioned earlier in this article is ME. I must emphasise that the pain was as intense as any other “real” pain I have experienced. I would wake in the middle of the night in the most excruciating pain and believed that something terrible was happening to me.

That something terrible was a brain and central nervous system gone awry. Thankfully, I was successfully able to unwire these neural connections and a year later was totally pain free.

After this experience, I have become fascinated at how easily the brain can learn things (even bad things like pain).  I’m sure the brain will be a topic I return to many times in future articles.

I’m not under any presumption that all chronic pain can be unlearnt. For many people, chronic pain is due to an obvious physical reason. However, for many people who are experiencing chronic pain and for whom there doesn’t appear to be a physical cause, it may be worth taking a look at the brain. It might actually be the culprit.

If you’re interested in reading about health-related issues, LIKE or follow my FB page: https://www.facebook.com/LindaMusic.writer/ or join my mailing list to get my articles direct to your inbox by typing your email address in the comments box  below. (Don’t worry, it won’t be published here).